Craft's story : For Rani Ahilya Bai Holkar, this weave was the ultimate expression of beauty, charm and elegance. In fact, legends says Rani Holkar put together a special team of craftsmen from Surat and Malwa to design an exclusive nine yard saree as a gift for for her all the guests of her palace.  At that time, 167 km from Maheshwar was a town called Burhanpur, known for its rich tradition of handloom weaving. It was from here, and from the town next door, Mandu, that Rani Ahilya Bai brought skilled weavers. She made them set up looms in her riyasat to teach the art of weaving to the women and men of Maheshwar. Her people acquired the skill fast enough but what they needed now were beautiful patterns that would win the hearts of consumers for all time to come. Rani Ahilya Bai mulled over this morning and evening as she watched the Narmada flow beneath her palace, blue and clear, creating thousands of patterns with its waves. Narmada, is regarded as the ‘Mother’ because its fertile banks feed people throughout the year. The patterns created by the boisterous waves of the Narmada were first etched on the stone steps and on the walls of her palace. Then Rani Ahilya Bai began to construct temples along the banks of the river. And on their pillars, walls, chhatris (domed pavilions), doors and jharokhas (overhanging balconies) were engraved stone flowers, animals, birds, waves (the Narmada lehar) and many other intricate designs. … Till today, one has only to pick up a Maheshwari sari and the designs woven on the pallu or the border can be found etched on some stone slab partially immersed in the mighty Narmada, narrating the story of this visionary queen. Blouse : running 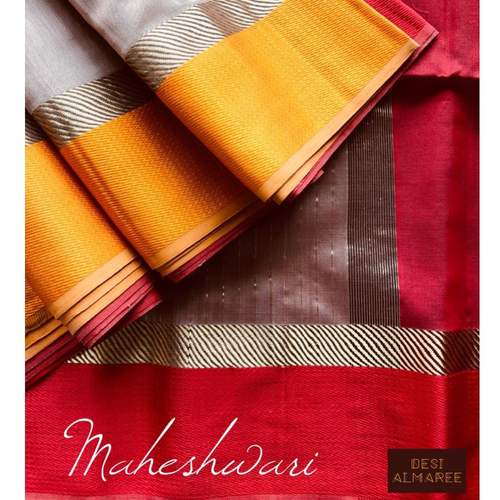 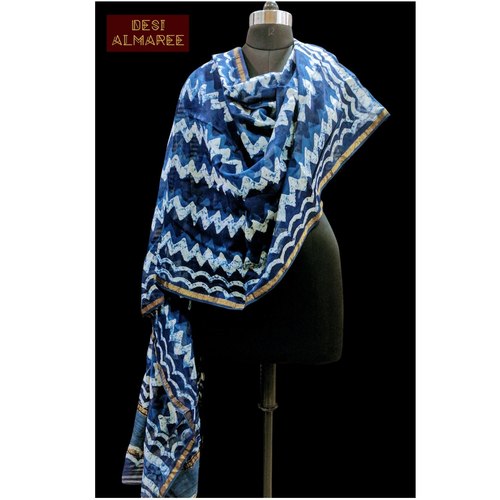